With the loss of at least 278 lives, the Brooklyn Theatre fire is number three on the National Fire Protection Association's list of "the deadliest public assembly and nightclub fires in U. S. History." 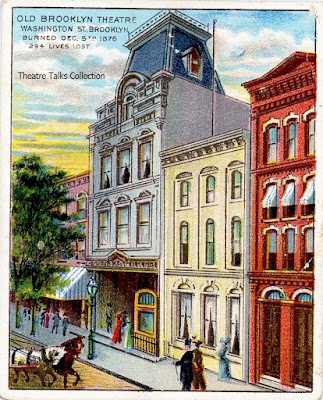 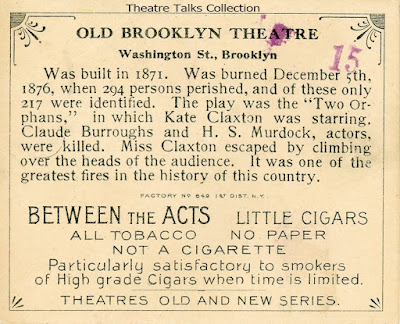 The Syracuse Daily, December 7, 1876:
"J. W. Thorpe, stage manager, states that the fire caught from a burner, the jets of which extend downward and conveyed fire to the drapery."

From an interview with Kate Claxton, Oswego Daily Times Express, December 19, 1885:
"By this time sparks were falling all over the stage and the fact that there was a fire behind the scenes could no longer be concealed from the audience. Still we continued the play. By the time I said 'You may beat me if you please, but you shall find that my will is stronger than your violence and I shall beg no more,' a panic had broken out in the auditorium and we saw that it was useless to attempt to proceed."

Claxton did not escape over the heads of the audience as mentioned in the card above.

The greatest loss of life occurred in the upper gallery and along the stairways leading down.

The testimony of G. A. Wiseman who "assisted in getting people out," Auburn Morning News, December 8, 1876:
"There was two separate stairways leading up there. As I got up to the first flight of stairs a lady coming down got her leg caught in the banister, a large man fell over her and others falling over him made a heap on which those in the rear piled. There were fully fifty or sixty persons packed in this heap at the front of the second flight of stairs."

Excerpts from Fire Marshal Keady's "investigation," the Daily Register, Hudson, New York, December 15, 1876:
"If the audiences had been notified when first noticed by the stage hands, they could have escaped, and that the request of the actors to the audience to sit down, although well meant, was disastrous in its consequences."
"That the means of exit from the gallery was not good enough."
"That the fire was caused by a border scenery taking light from the border lights."

On December 8, 1876, 104 bodies were buried in a common grave at Greenwood Cemetery.

The Brooklyn Daily Eagle, December 8, 1876:
"There was a tremendous crowd assembled at Greenwood. As the cortege passed through the gate the bell of the tower tolled mournfully. On either side, along the pathways, on the hillsides and invading private plots, the people were there by hundreds and by thousands."

Four years later a monument placed over the grave.

The Herald, Pine Plaines, New York, November 24, 1880:
"The citizens of Brooklyn have erected in Greenwood cemetery a handsome monument to the memory of the victims of the Brooklyn theatre fire. One hundred and five unrecognizable bodies were buried in one lot in the cemetery."
Since 1997 theatre historian,  Cezar Del Valle, has conducted a popular series of  theatre talks and walks, available for  historical societies, libraries, senior centers, etc.
Del Valle is the author of the Brooklyn Theatre Index, a three-volume history of borough theatres.
The first two chosen 2010 OUTSTANDING BOOK OF THE YEAR by the Theatre Historical Society. Final volume published in September 2014.
Currently seeking funding for “Editing & Formatting” the first three volumes of the Brooklyn Theatre Index, 3rd Edition
AboutMe
Goodreads

Posted by Cezar Del Valle at 7:19 AM No comments: