Received an email from local historian John Dereszewski suggesting that the Parthenon Theatre be added to the third edition of the Index.

Today the address would place it in Queens, but the theatre only "migrated" to that borough in 1925 when the county line was re-drawn.

Mr. Dereszewski believes that the Parthenon "was the most significant building to change boroughs  as a result of this action." 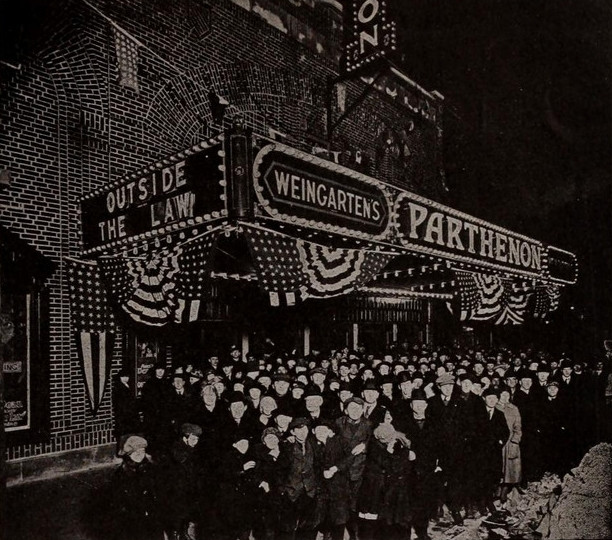 “For the initial showing at the new $300,000 Parthenon Theatre in the Ridgewood section of Brooklyn, N. Y., the Universal-Jewel, ‘Outside the Law,’ starring Priscilla Dean, was selected as the feature photoplay. The theatre is owned by Herman Weingarten and is one of the newer playhouses in Brooklyn.
“The theatre, which is located on the corner of Myrtle and Wyckoff avenues, has a seating capacity of 1600 people, and was opened for the first time to the public on February 26th.
“The general decoration scheme of the new playhouse is gold and old rose. There are large rest rooms for the women patrons, writing rooms and smoking rooms for the men, telephone booths and a promenade. A perfect view of the screen may be obtained from any seat in the house.”
Outside the Law

The Parthenon will be added to the third volume third edition of the index. Thanks Mr. Dereszewski for the suggestion.

Since 1997 theatre historian,  Cezar Del Valle, has conducted a popular series of  theatre talks and walks, available for  historical societies, libraries, senior centers, etc.
Del Valle is the author of the Brooklyn Theatre Index, a three-volume history of borough theatres.
The first two chosen 2010 OUTSTANDING BOOK OF THE YEAR by the Theatre Historical Society. Final volume published in September 2014.
Editing and updating the third edition of the Brooklyn Theatre Index.
AboutMe
Goodreads
Medotcom
Posted by Cezar Del Valle at 10:07 AM No comments: